It’s fairly obvious from the banner what WE are celebrating this year:  all for One was founded 25 years ago this September.  But by a happy coincidence, the very first play in our repertoire, A Mighty Fortress, concerns the events surrounding another significant anniversary this fall:  500 years since the start of the Protestant Reformation. That made it an easy decision to produce it as the opening show of our anniversary season.

The Reformation is generally agreed to have “officially” begun with Martin Luther’s nailing of his 95 Theses to the church door in Wittenberg on October 31, 1517. He was calling for public debate concerning the Catholic Church’s practice of selling “indulgences” (reduction of the soul’s sentence in purgatory). This led to several confrontations with the secular and religious leaders of the day, culminating in his trial before Emperor Charles V. 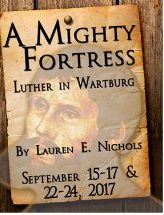 A Mighty Fortress, which opens September 15, and stars Jadon Moore as Martin Luther,  is a powerful one-man show which introduces the audience to Luther while he is in hiding in Wartburg Castle. He relives for his viewers the events which led him to his final break with Rome. Filled with humor and humanity, this hour-long performance is an important play for contemporary audiences’ understanding of Church history. Luther models for us a man with of courage, humility and wisdom.

Future blog posts will give a brief synopsis of events leading up to the Reformation; important historic people and terms; and a bibliography of sources for further reading.