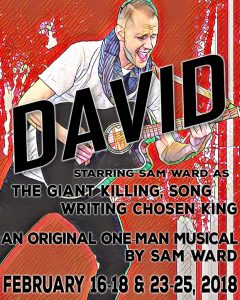 DAVID: the Giant-Killing, Song- Singing Chosen King  will receive its world premiere on afO’s stage in the ArtsLab theater at 300 E. Main Street, from February 16 through 25, 2018.  Here are some thoughts from playwright/composer/actor Sam Ward on this dynamic one-man show, a combination of theatrical story-telling and high-powered rock concert:

March 10, 2017. The stage and the audience were both small. 60-70 people had gathered for a fundraising event.  all for One‘s artistic director introduced the show there was applause as I walked onstage to begin a 30-minute preview of my original one-man musical, DAVID.  I was a little nervous, but I was prepared and felt called to share this story.

As we move toward a polished production–with five “mighty men” musicians accompanying me–I wanted to share some photos from that first preview performance last year, along with a synopsis of the first half of the show:

At the top of the show, the prophet Samuel anoints David.  The Spirit of God enters David and empowers him for the rest of his life…

The Philistines gather their troops and attack Israel…

The Philistine champion, Goliath of Gath, steps out from the frontlines and issues his challenge, “Give me a man and let us fight it out together!”

David hits the giant hard in the head and Goliath falls, facedown in the dirt!

As the Israelite army heads home, the women come out from the villages to welcome King Saul.  For fun they sing, “Saul has killed his thousands, David his tens of thousands.”

Filled with jealousy, Saul tries to kill David.  David sings a song of justice to God.  “O Lord my God, I take refuge in you / Save me and deliver me, from all who would pursue…”

Saul discovers that Michal, his daughter, is in love with David.  Thinking the Philistines will get rid of David for him, Saul challenges David to kill 100 Philistines to get Michal as his wife.  David does it and Saul gives his daughter, Michal, to David in marriage…

Then God sends a dark mood to afflict Saul.  It takes control of him.  He is at home with his spear while David is (again!) playing music.  Saul tries to pin him to the wall…

David escapes and sings to God.  “Deliver me from my enemies, O God / Protect me from those who rise up against me…”

David runs to Nob and talks to Ahimelech the priest.  Ahimelech gives him the holy bread, taken from the presence of God, and also Goliath’s sword.  David escapes to Gath…

David is recognized by the Philistines.  Afraid for his life, David pretends to be insane.  When he escapes he sings his thanks to God, “In God, whose Word I praise / In God I trust, I will not be afraid / What can mortal man do to me?”

This is just the beginning of David’s life and only the first 30 minutes of a show which is now about 80 minutes long.  I’m excited to present these characters, these songs and THIS STORY, because I think it will help all of us see a man who was flawed, but who loved the Lord with his whole heart.

“A Christmas Carol” is tuning up…

Other changes in our adaptation of ROMEO & JULIET

There isn't really any such thing as a "spoiler" in a well-known story, but you…