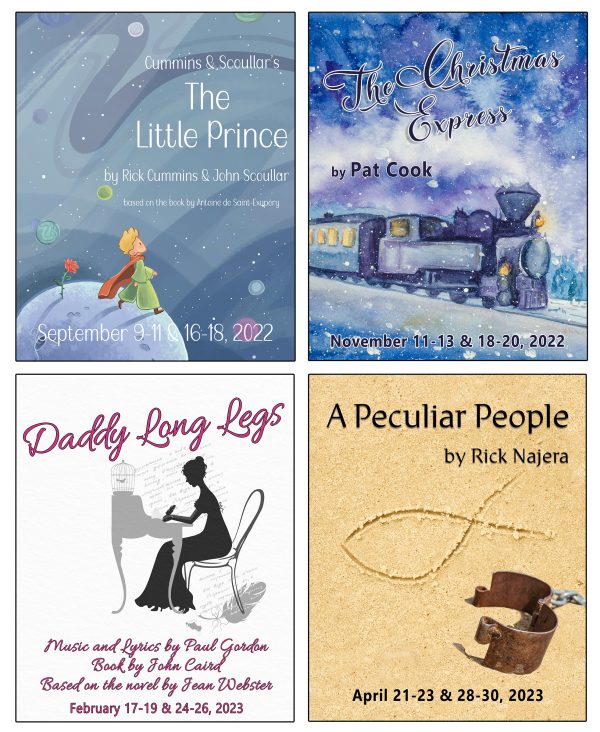 Each FLEX pass has four (4) tickets that can be used for any show, in any combination to give you the greatest flexibility in using your tickets.

The Little Prince (September 9 – 18, 2022) is an enchanting new adaptation of the classic French children’s novel by Antoine de Saint-Exupery. An aviator is stranded in the Sahara. A mysterious young boy appears, demanding, “Draw me a sheep.” The pilot, desperate to repair his plane, has little patience for the boy at first. But the more he learns of the prince’s home, his travels and his struggles, the more intrigued he becomes to understand the boy. Part fantasy, part allegory, part parable, The Little Prince has much to say about life, love and true friendship. Rated G for all ages.

The Christmas Express (November 11 – 20, 2022) takes us to the train station of a sleepy backwater town in fly-over country. It’s Christmas Eve but no one is happy. The station is so idle it may be closed permanently, the manager is grumpy, the local residents are variously struggling with job or family woes. Then Leo Tannenbaum arrives on The Christmas Express—a train that’s not on the schedule. And everything—and everybody—starts to change.  Rated G for all ages.

Daddy-Long-Legs (February 17 – 26, 2023) is a delightful musical adaptation of Jean Webster’s beloved epistolary novel about Jerusha Abbott, an orphan from the John Greer Home, who receives a marvelous gift: one of the trustees wants to grant her an all-expense paid college education. The catch: he won’t tell her anything about himself, including his name…but he wants her to write to him every month.  We watch Jerusha mature to womanhood as she discovers more and more about herself. But will she ever discover the identity of her benefactor?  Rated G for all ages.

A Peculiar People (April 21 – 30, 2023) takes us to the Roman Empire and a 1st- century prison where Mariam, a Christian, awaits sentencing. Enter Justinian, accused of being a Christian rabble-rouser, preacher and writer.  Except Justinian protests that he is innocent…at least, he’s not guilty of being a follower of this ‘Jesus’ person.  This historic comedy-drama is a timely look at what ‘the courage of one’s convictions’ might cost. Rated PG for themes.

This activity is provided with support from Arts United of Greater Fort Wayne, the Indiana Arts Commission, a state agency, and the National Endowment for the Arts, a federal agency.