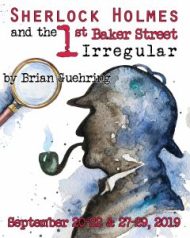 Sherlock Holmes and the 1st Baker Street Irregular is a new play by Brian Guehring which incorporates several of Sir Arthur Conan Doyle’s short stories about the famous detective, and weaves in an original story about how Holmes came to employ his “irregulars”–various street urchins who ran errands and gathered information for him.

“Wiggins,” a resourceful young person, is the leader/protector of a gang of London orphans. When the wrong pocket is picked, this gang is brought in contact with none other than Sherlock Holmes. Neither he nor the orphans appreciate at first just how useful their partnership could be.  Expect suspense and lots of laughs as Wiggins becomes Holmes’ apprentice and both of them get more than they bargained for.

The play, which runs a brisk 75 minutes with no intermission, is a perfect introduction for young people who are unfamiliar with literature’s most illustrious private detective. The Red-Headed League and The Blue Carbuncle are two of Holme’s quirkiest puzzles, and neither involves a murder, making the play truly appropriate for all ages to enjoy together.

Our cast of 13 includes six juveniles.  Expect to see:

Nate Chen as SHERLOCK HOLMES
Matthew Williams* as DR. JOHN WATSON
Jen Netting as MRS. HUDSON
Josette Wilhelm* as WIGGINS
Timothy Deal as INSPECTOR LESTRADE (and others)
Dennis Nichols as HENRY BAKER (and others)
Cole Litwiller* as DUNCAN ROSS (and others)
Ruth Fearnow as SPAULDING (and others)

Last week you met Michael, whose work with afO is impacting our culture for God…