Elsie Kipling and her friends are using their imaginations to act out stories about animals in far-off lands. Not too different from how children have historically played–using furniture and blankets and other found objects to become the scenery of their world.

A good theatrical design needs to take the context of the play into account, and create a world which seems effortless and inevitable. In the case of The Just So Stories, the director first had to decide how the characters in the play would interact with the stories:  would they obviously be children pretending (and letting their child-character show through) or would they, when acting out each story, become fully invested in their animal-character?

(This is not an unusual dilemma. Any time there is a “play within a play” we need to ask these questions. An O. Henry Christmas two years ago required similar decisions to be made.)

Since the imagination of childhood is typically vivid, and they are especially good at immersing themselves in their play, the choice to allow the actors to really “become” their animal characters was a wise one. Of course, there are still elements of “let’s pretend” that are obvious to the audience:  for instance, water is frequently an important part of the story, and the actors portray ponds and rivers using shimmery fabric. (However, even though their child-characters complain about being “just water”, once the story starts,the water is just as invested in being “real” as the animal-characters are.)

To further enhance the surreal, outside-of-time quality of Kipling’s stories, and the imagination of children, the set is a minimalist rectangle, containing only a large round ottoman (created by Lee Knox and Christine Newman-Aumiller). The floor will be painted (by master scene painter Dave Ball) to look like a Victorian hardwood floor partially covered by an oriental rug–appropriate to the time, practical (no trip hazards!), colorful, and also part of the “surreal” quality. 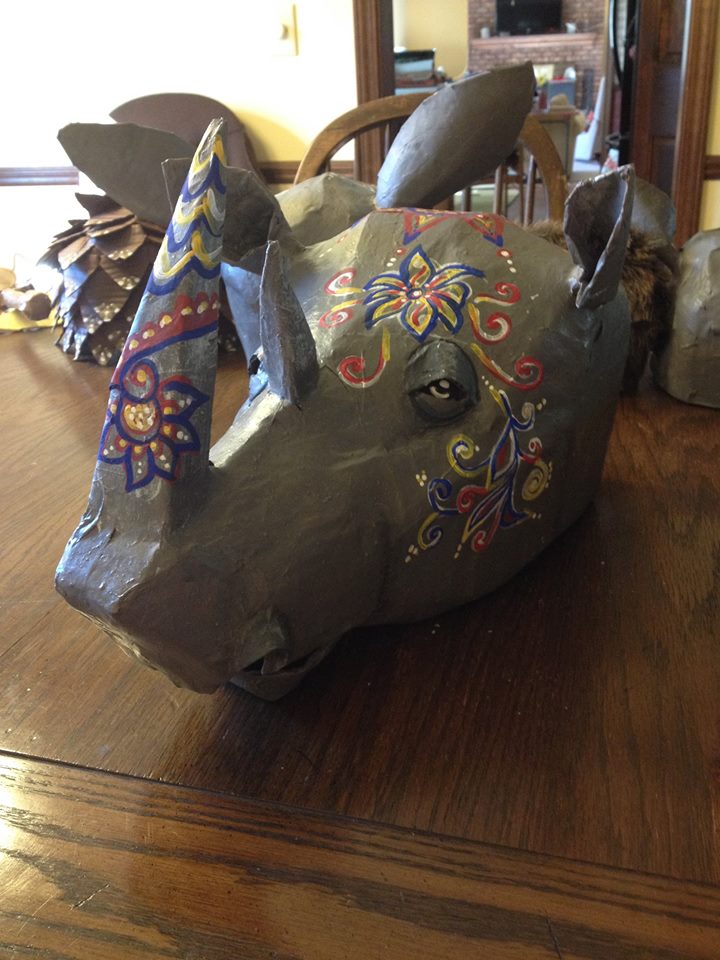 The children, who are all part of Elsie’s imagination too, wear black harem-style pants (courtesy of costumer Deanna Deturk) and black shirts, but move with the un-self-consciousness of children. For each story, large head pieces have been created (from Sophie Knox‘s original designs) for all the animal characters–these are realistically shaped and painted, but they are all enhanced with colorful decorative details–again, part of the whimsy and fantasy of childhood play.

Since the stories are all “origins” stories, the music which has been composed by J. Scott Kump (who also composed the goblin music for The Princess and the Goblin, and the minimalist incidental music for 1984) to suggest a “proto-ethnic” sound:  various percussion, pan flutes, marimbas,etc (enhanced with voices) provide accompaniment to bits of the stories and the dances which have been added in several places.

Choreographer Mia Bendele has helped the cast to learn to move in a more stylized way. The proto-kangaroo brags about her dancing–and she dances!  The djinn of the desert “travels in a cloud of dust” and needed to learn how to move like a whirling dervish. Even the inanimate objects got some training: two actors portray various stands of trees and shrubs using shared weight-bearing poses which are graceful and evocative.

Finally, Jeff Salisbury‘s lighting design will differentiate between Elsie’s “real world” light, the light of her imaginary world, and the worlds of the individual stories (including night-time atmosphere and special lighting on the ‘water’).

Famous People You Need to Know

When we watch a play or a movie set in another time period, most of…

PLOT SUMMARY, Around the World in Eighty Days

Jules Verne's classic novel, published in 1873, is said to be his most popular book…