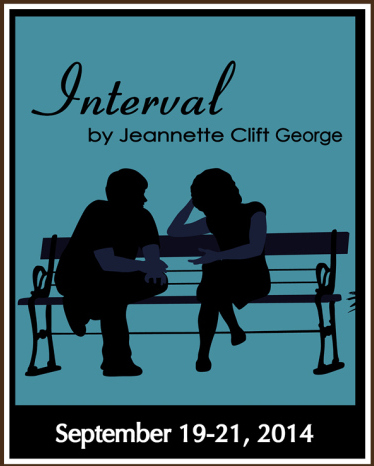 Alan sits shivering on a bench in Riverside Park. He’s waiting for a ride. Lenore hurries on to use the payphone to call her roommate to pick her up. Other than their dependence on others for their daily commute, Alan and Lenore don’t seem to have anything in common. She’s from Wisconsin, he moved from San Francisco. She’s a receptionist, he “executes accounts.” He’s private, a man of few words; she wears her heart on her sleeve and can’t stop talking.

But as Lenore rattles about (and impersonates) her family, her workplace, her dreams, a connection is made. The random meeting becomes a settled Friday ritual, complete with refreshments. But can lasting relationships be built on “cashews, coffee and coincidence”? Their budding unlikely friendship will be tested by surprising events at Lenore’s work, and by truths unspoken by Alan.

Interval, by A.D.Players founder Jeannette Clift George, is a tour de force for two actors. all for One productions is thrilled to present husband and wife Sam and Sara Ward—truly a force to be reckoned with—as Alan and Lenore. Part romantic comedy, part murder mystery, Interval will keep audiences guessing, while they laugh, listen and perhaps shed a tear or two.

The last chance to purchase 2014-2105 season tickets will be during the run of Interval, September 19, 20 and 21, at the Allen County Public Library auditorium. Tickets, whether season or single show, may also be ordered online or by phone, or bought at the door. All seats are unreserved. Doors open 30 minutes before the performance.

Famous Reformation-Era People and Terms You Need to Know

Historic terms and figures from the Reformation era, to help orient the audience to the world of afO's "A Mighty Fortress".