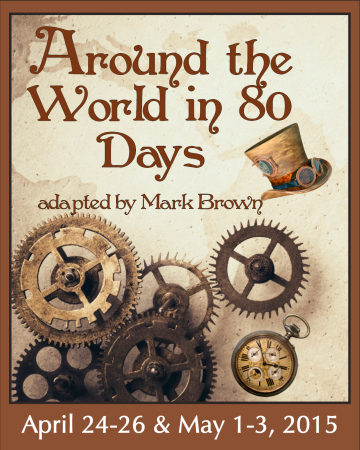 Astute viewers may have guessed last Spring that our upcoming production of Around the World in Eighty Days will be presented with a steampunk-themed stage design. For you, the show art said it all, and I don’t have to explain or justify anything.

But for the rest of you, some explanations are necessary. What IS steampunk? Why is it appropriate for this show? How are we going about designing with this theme?

First of all, thanks are due to Michael Wilhelm, who suggested both the show and the steampunk stage design. I will admit that most of us associated with afO immediately asked, “What in the world is ‘steampunk‘?”

…Steampunk perhaps most recognisably features anachronistic technologies or retro-futuristic inventions as people in the 19th century might have envisioned them, and is likewise rooted in the era’s perspective on fashion, culture, architectural style, and art.” 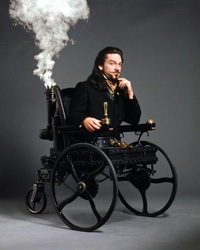 One early example of steampunk in visual media is the television show, The Wild, Wild West, which aired from 1965 to 1969, and inspired a 1999 feature film.

Authors who are associated with steampunk (art, illustration, film or stage productions) include H.G. Wells, Jules Verne and Mary Shelley.  All three imagined technologies which did not (and still don’t, in some cases!) exist, and described them in terms consistent with scientific knowledge and materials of the 1800s.

Although Around the World in Eighty Days is not actually fantasy or sci-fi, the combination of steampunk-associated author Jules Verne with then still-new use of steam engines for transportation make steampunk a logical design choice.  Images strongly associated with steampunk include clocks and watches, gears and machinery. Look for all those things on the set (and costumes) for our production!

AND, stay tuned for an exciting opportunity to OWN some of the custom pieces being designed for us!

If you have seen any of the myriad film or television adaptations of Jane Eyre,…

This post, on the many and various forms taken by works which have been inspired…

Congratulations to all Season 14 participants!  All award winning plays will be performed at the…