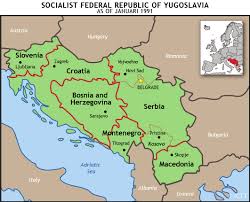 I asserted in a previous post that The Music Lesson is not a play about the Bosnian civil war, per se. It is about humans dealing with intense conflict, the effects of such trauma on children, and the sustaining power of beauty, purpose and human contact to bring healing.

However, a secondary benefit of producing this play has been to heighten the cast and crew’s awareness of the tragic events of this war, and to bring home to us a deeper appreciation for all that is being suffered currently in places like Ukraine, the Middle East and North Africa. Americans, long insulated against the horrors of war on our soil, have difficulty in imagining what it is like to live in the midst of such a crisis. I hope that this play will engender a new empathy in our audiences for those living under siege.

I wish there were an easy way to summarize the civil war which took place in the former Yugoslavia during the 1990s. The conflict between ethnic Serbians, Croatians and Bosniaks is an ancient one, made infinitely more complicated by centuries of intermarriage.  This map of Yugoslavia in 1991 shows the states into which the country was already divided:

That same year, Slovenia and Croatia seceded from Yugoslavia, and multi-ethnic Bosnia-Herzegovina published a referendum for independence. Bosnian Serbs rejected the proposal, wishing instead to create new states which were ethnically pure. The play makes several references to the fact that much of the Bosnian population was ethnically mixed and had neither the desire nor the ability to separate along strictly ethnic lines. [NOTE: The ethnic groups referred to throughout the play are Serbs (Orthodox), Croats (Catholic) and Muslims (aka Bosniaks).]

Irena Batonovic, in the play, sums up the conflict this way:

“Justice, people say, look what they did to us. As far back as we can remember, they are enemy, we never forgive them, we bomb them, shoot them, starve them and make sure we kill their children, so hatred never die.”

The primary war event to which the play refers is the Siege of Sarajevo–“the longest siege of a capital city in the history of modern warfare” (Wikipedia). It took place between April 1992 and February 1996 (1,425 days total). Throughout the play, Irena has flashbacks to moments with her student, Maja, during the siege. Ivan also describes hiding in the basement during bombings, and the couple relive one such time together.

One excellent work of literature depicting the siege is the novel, The Cellist of Sarajevo by Steven Galloway, available in our Allen County Public Library. It is based loosely on the actions of a musician in 1992, who sat in a public square and played the Albinoni Adagio every day for 22 days, to honor 22 people killed by a grenade while waiting in line for bread. Achingly beautiful prose describes in horrific detail the realities of daily life in a city under siege.

To gain a fuller picture of the experiences of children at that time, read Zlata’s Diary, a Child’s Life in Sarajevo, by Zlata Filipovic. This little book was almost certainly part of the source material used in writing this play. Both Shannon, who plays Maja, and I read it in preparation for rehearsal.