We have opened!  It is so satisfying to see the finished product, after weeks–or months–of planning, discussion, scrambling to find or make props and costumes, etc.  I thought it would be interesting to give you a bit of insight into choices we’ve made in a number of areas:  costuming, set design, videography and lighting design… I was going to create multiple posts, but as it turned out, all these areas were tightly interconnected. Decisions made in one area affected them all.

The script calls for identical coveralls for the Party members–they are blue in the book, though navy versus light blue is not specified.  The Inner Party are supposed to be attired in black coveralls. This all sounds simple and straight-forward, doesn’t it?

But inquiries with our area’s uniform company revealed that no black coveralls were available–navy blue and gray were my choices. And the company, while willing to loan uniforms to us, did not have the number/sizes we needed. Meanwhile, I was unsure that blue was the right choice for our production…and I did not care for the Inner Party wearing coveralls, either.

Enter serendipity.  One of the actors playing a guard wore black pants and black dress shirt, with a dark red tie, to rehearsal one night. “You know, Levi, I really like that look.”  When I found that the actors playing the other guard and O’Brien had the same items in their own wardrobes, it was settled. The “black suits” would not wear coveralls at all.

I knew that the set was going to be mainly gray, and wanted to express the bleak sameness of life for Outer Party members. Shopping online turned up affordable gray short-sleeved coveralls in all the sizes we needed.  We know from the script that Winston Smith is number 6079. We assigned numbers to the other party members. One of our video actresses is also an expert crafter, and volunteered to print the numbers on fabric and sew the patches to the uniform pockets. 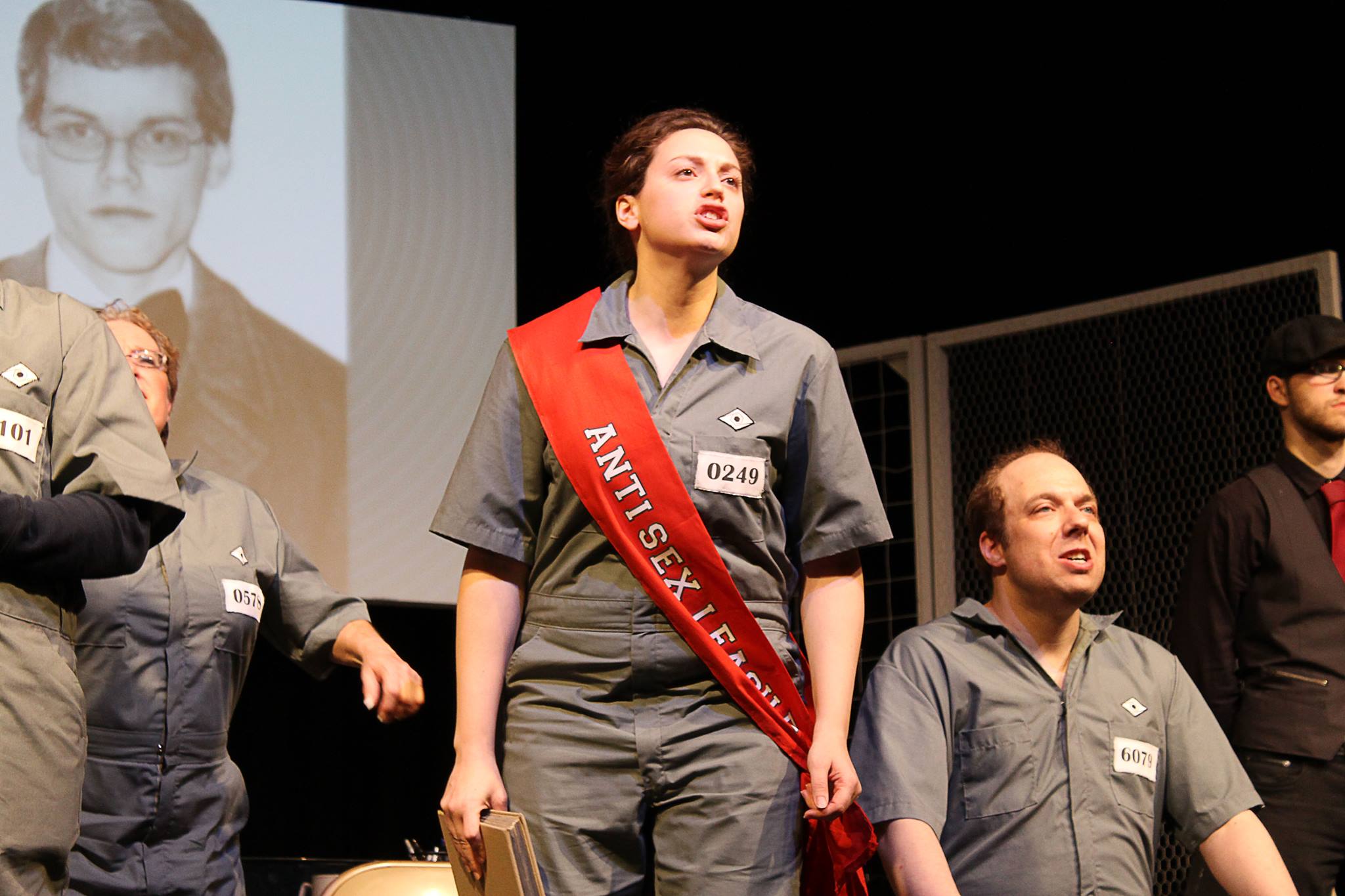 Graphic Design/Videography hinges on the Philosophy of the Production

Since we wanted to do more than just hang a poster of Big Brother [click on the link to read about the Technology of 1984], I needed an actor to portray him. Originally, we thought that Big Brother would be on-camera quite a bit. But we also needed the Big Brother poster to loom over everything. We photographed the actor and sent it to our favorite graphic artist, Michael Wilhelm, who worked magic on it, and in the process created a logo for Oceania which we loved.  That logo, which incorporates a stylized O but also suggests a eye, became an integral part of the show: it appears on slogan signs and newscasts, and it was added as an additional patch on the Party coveralls.

As we continued to talk through the politics behind Oceania’s government, we became more and more certain that if Big Brother ever did exist, he was no longer the actual leader by 1984.  Rather, he exists as a construct, a face to represent the Party. (O’Brien in the play denies that Big Brother can ever die.) Therefore, we opted not to actually portray him on video. We did use the actor’s voice in one scene, introducing the Two Minutes Hate, but elsewhere the “Loudspeaker” voice is heard. We also see that actor as a Newscaster in several videos. He is a “black suit,” of course.

Although the play originally called for only audio cues, and made the Loudspeaker voice the calisthenics coach too, we based our scene on the book at this point. An actress portraying the coach appears on video. As in the book, she specifically singles out Winston for criticism. He’s not doing his toe-touches correctly.  Since the telescreen is behind the actors on stage, and they are facing the audience as they “look” at the screen, staying in sync with the video was one of our biggest challenges. We employed a number of tricks, and thanks to our technicians in the booth the illusion is achieved perfectly.

Our next question was whether to have video of Goldstein. Where would the Party have gotten it? Would it be old or current?  Is Goldstein still alive? Does the Brotherhood exist?  Winston never gets answers to these questions, so we left it ambiguous, as well. The actor portraying Goldstein was photographed in character, and he voices the speech which is used during the Two Minutes Hate.  The audience is left to decide to what extent any of this is faked by the Party.

Having chosen to use an actual screen, rather than a Big Brother poster to stand in for it, we then became obligated to be somewhat consistent in how we employed it. If the screen is supposed to be “on” in a scene–notably in the opening Ministry of Truth scene, and in Winston’s apartment, what should be on it? Should there be audio at all times?

The opening scene establishes that announcements interrupt the workers randomly every few minutes. But in between times, we project either Party slogans or Big Brother. Using slogans allows us to underscore the action taking place on the stage–generally whatever slogan is referenced in the dialogue is what the audience will see on the screen.  However, we decided against having any sound playing during those times. Our actors are not miked, and it’s challenging for both actors and audience to deal with ambient sound effects…keeping them at a volume where  they are audible but not distracting is too difficult to be worth it, most of the time.

When O’Brien asks that the screen be turned down, he is simply avoiding the possibility that an announcement may interrupt him–and he’s displaying his authority to do so.  (Kudos to videographer Brent Kuster for the visual effect in O’Brien’s apartment when the telescreen is turned off completely:  a message appears which says, “Privilege-enabled shutdown in 5 seconds”…and counts down from there. Clever!)

Another deliberate choice was to have no telescreens in the Ministry of Love. A disembodied voice was felt to be more sinister and frightening in those scenes.

Projecting all these images on a screen at the back of the stage made for greater freedom in blocking each scene. Even in the prole apartment, where instead of a telescreen there is a painting of a church, being able to project that image allowed the actors to do their dialogue facing the audience rather than awkwardly looking at a side wall.  (And using royalty free or original graphics was far less expensive than printing all those images.)

Our most original piece of videography–thanks to a suggestion from tech director Jeff Salisbury–is Winston’s confession. We needed about 90 seconds for a costume change. Jeff pointed out that Winston specifically mentions having confessed (and O’Brien dismisses it as being for propaganda). I asked Todd Staszak, who plays Winston, to write a confession based on material in the book. He did so, and typed it up to read. The strong implication is that it was written for him.

A Word About Walls

Last year, Bob Jones designed our set for The Beams are Creaking, and employed a very simple effect:  walls constructed of chicken wire stretched over a hollow wooden framework. Painted black, they disappeared, but large foam “bricks” or stones” could be placed on them, and gave a suggestion of wall which floated in the air.  For 1984, we constructed more wire walls, but painted them all light gray.  The resulting effect is more like a prison yard, and permits all entrances and exits to be visible to the audience. The idea here is to portray physically the complete lack of privacy under which the Party members live. 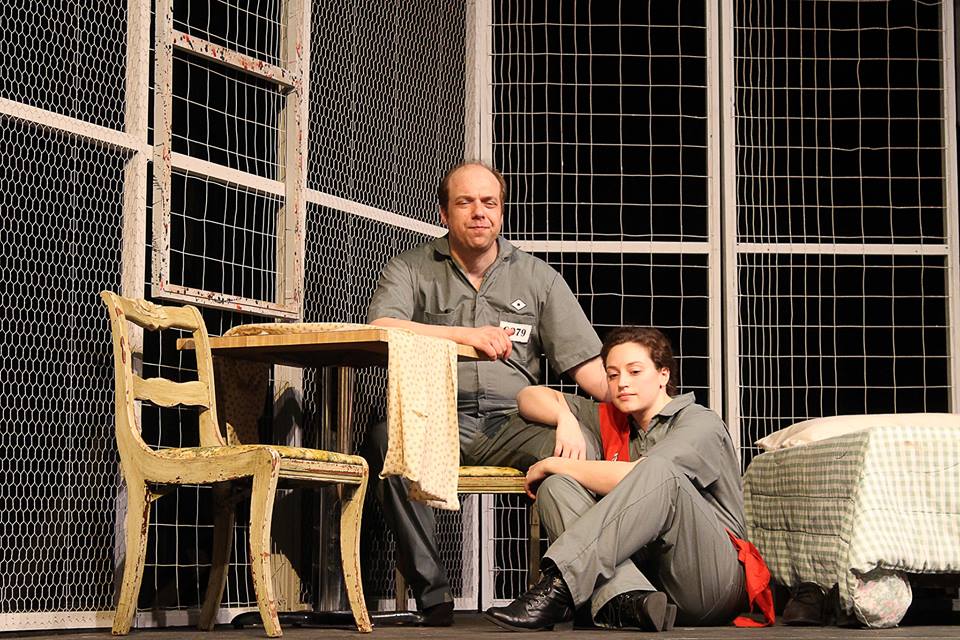 Our technical apprentice for this season, Zach Nolan, brought his apprenticeship to completion by designing the lighting for 1984 himself. One of his first ideas was that we would not “gel” most of the lights. Usually nearly all the lights onstage have a thin colored plastic filter called a gel. The combinations of colors create various effects, giving a sense of being indoors or out, cool or warm.  Zach employed a harsh white light in the Ministry of Truth at the beginning of the show, and even more harsh lighting in the Ministry of Love scenes toward the end of the play. In Winston’s and O’Brien’s apartments, there is also a bluish light coming from the “telescreen”…watch Winston’s face when he moves from his chair to the corner of the room where Julia is hiding…or watch when O’Brien turns his screen off. There is a definite shift in color.

Red is the Party’s favorite accent color, and we see it in costuming, in the graphics and videography…and in the lighting in the climactic scene.

I want to say thank you here to everyone to worked so hard to make sure that everything onstage worked seamlessly together. Zach built the video frame, and readjusted lighting cues so that the walls would not cast shadows on the screen. The stage crew practiced so that we would have minimal waits between scenes. Sound & video cues were created to enhance the storyline and move everything along.

We could not be more thrilled to announce that we have, for the first time,…

There are many happier themes in the novel and stage adaptation of Jane Eyre, but…