Up until then, we had had fairy tales–ubiquitous across many cultures–and nursery rhymes (many of which were actually political and social satire whose meaning became obscured across time), and religious stories which were often written to scare children into good behavior. But there is little if any literature for children before the middle of the 19th century–and the list contains many titles which today might be considered child-appropriate stories, but are no longer easily be read by children. (Examples:  Treasure Island, Oliver Twist, Huckleberry Finn.)

In presenting The Wind in the Willows, afO enjoyed introducing a British classic to an American audience much less familiar with this delightful story.  It was not without its challenges.  The novel is a curious mixture of idyllic pastoral and madcap adventure. Mole, Rat and Badger sometimes wax philosophical, even lyrical, about the countryside, the river, the importance of home. Then there is the very striking chapter called ‘The Piper at the Gates of Dawn”–which seems either to be the most loved or most despised bit of the book, with its spiritual overtones.  Most difficult of all to depict is Toad himself–he is pompous, impulsive, dishonest, volatile…and yet, again and again he is repentant, and generous to his friends.

James Belich has managed to capture both the serenity and the mayhem of the book, by making it revolve around Toad and his 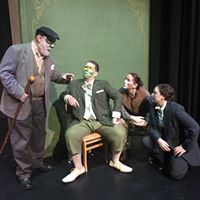 three friends right from the beginning. Although boating and caravans are mentioned, the play’s plot focuses on Toad’s mania for automobiles.  All the favorite scenes are here, including Mole lost in the Wild Wood beset by ferrets and weasels, Toad stealing a car and going to jail, Toad and the Jailer’s Daughter, Toad and the Bargewoman, and the Taking of Toad Hall.  Belich even squeezes in the Christmas carolers (although they were not mice in our production, but instead the Rabbit, one little ferret and the otter called Little Portly), and Rat and Mole’s meeting the Piper…a mystical unseen presence known by his haunting music. [That scene, if any, could probably have been cut, as it had nothing to do with the plot…but there were a couple of beautiful lines that I hated to cut:  “Rat! Are you afraid?” says Mole. And Rat replies, “Afraid? Of Him? Oh no, never! And yet…oh, Mole, I AM afraid.” 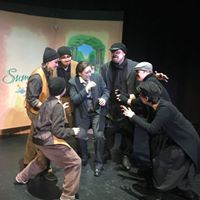 All original music was composed for our production. A feeling of English folk songs was evoked throughout. We couldn’t resist using “Pop! Goes the Weasel” for the villains’ theme…sometimes in the minor, to sound more sinister. “Toad’s theme” was a similar jig, and the two of them were combined for the climactic battle scene.

Other elements which had to be carefully decided included staging, costuming and makeup. We opted for a storybook set which suggested that the characters emerged from the book. The animal characters wore stylized face paint but were otherwise dressed as humans, as they behave throughout the book in quite human ways. 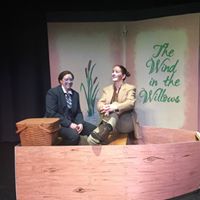 Alan sits shivering on a bench in Riverside Park. He's waiting for a ride. Lenore…