One of the most critical technical aspects of any production, to me, is the sound design. If the sound is just right, it enhances the action and helps the audience to fully understand both what is going on and how the characters are feeling. If done badly, it can be jarring, confusing, comical or embarrassing.

Neither of the one acts which opens this week requires very many sound effects, but those that do occur need to be quite precise:

Our behind-the-scenes genius of sound effects mastering, for the past two seasons, has been J. Scott Kump.  We are blessed to have his meticulous artistry and the equipment at WFCV (where Scott works) at our disposal. Watching the visualization of sound waves, and the ways Scott can manipulate them, is amazing. If I say, “I wish the bells were a bit slower at first, but then become more intense, both louder and faster…”  he says, “We can do that.”  “But we didn’t record them that way,” I protest. “Doesn’t matter,” he says. And proceeds to prove it.

Music for Prisoner of Joy 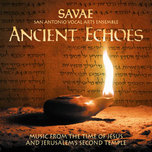 Last season we were granted permission to use selected tracks from a CD entitled Ancient Echoes during our production of the comedy-drama A Peculiar People, which takes place in the first century AD. As the audience enters the auditorium on Friday night, they will hear that same music being played, as a way to begin their transport back in time to around 61 AD.

In chapter two of Paul’s letter to the church at Philippi, there is a passage (2:6-11) which is typically set in most translations to look like poetry. This section is believed by most scholars to have been a pre-Pauline hymn which Paul inserted at this point in his epistle. But New Testament scholar Gordon Fee thinks otherwise. You can read a brief and quite understandable summary of his view on the blog, Near Emmaus.

Although I think that Mr. Fee has made some valid points, I also liked the idea of this text being turned into a lyric for worship, and so I composed a simple melody which uses the exact text of the translation we’re using. It was challenging to create something which modern ears would accept, since there neither rhythm nor rhyme in the lyric. Inspired by what I had heard on the Ancient Echoes CD, I attempted to create a very spare texture with little harmony. Since we have tried to impart a slightly contemporary–or at any rate, timeless–flavor to our production, the rhythms of the song include quite a bit of synchopation, which gives a more modern feel.

I’d originally liked the idea of using live musicians through the piece, playing the instrumental interludes, accompanying the singing, and perhaps even doing the sound effects. But the musicians I wanted were unavailable, and it proved more efficient to record everything in advance. Ultimately I found I preferred the song to be unaccompanied. The voices you hear are cast members Ron Stauss and Scott Kump.

All the other instrumental music in the play is my own, recorded on a Roland keyboard at First Missionary Church.

Music in A Mighty Fortress

I’ve been looking forward to redesigning the sound for this play for many years. After we had paid for a professional sound tape to be made, back in 1990, I heard Luther’s own version of “A Mighty Fortress” sung in a Lutheran church. It had the lively rhythm of a Renaissance dance to my ear, and I wished I could have used it in that form for our play.

As I was looking through a Lutheran hymnal to find this version, in preparation for recording, I discovered to my delighted surprise that Luther had composed several more hymns which were found in that hymnal. I was in need of two other quiet instrumentals in the script: a renaissance lute piece while Luther is walking to Augsberg, and another quiet piece to underscore a letter he writes to a dear friend. I was able to use two melodies written by Luther himself. You’ll also hear longer and fuller versions of these hymns, and two others, during the intermission between Prisoner of Joy and A Mighty Fortress.

There are two pieces of authentic Gregorian chant played early in the play: Veni Creator Spiritus is heard when Luther first takes his novice vows, and a communion chant plays under Luther celebrating his first Mass.  Two loud fanfares are heard later. One is a renaissance fanfare by Claude Gervaise, arranged by Peter Reeve for the Philip Jones Brass Ensemble. You can hear the whole thing here.  The other is a snippet of a sacred piece by Thomas Tallis which seemed appropriate when Luther appears at the Diet of Worms.

We hope you enjoy getting “the scoop” about what we’re doing behind the scenes. Please consider sharing your post-performance observations in the comments section below!