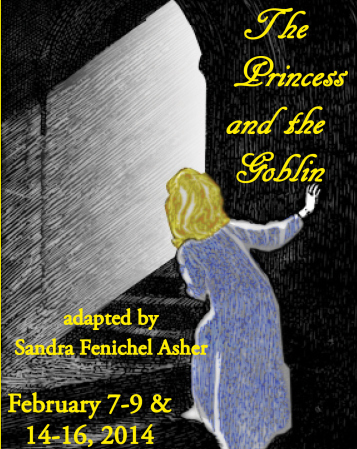 It’s hard to believe that we’re less than a month from opening our next production! In a way, it feels as though we’ve barely gotten started, what with holidays and bad-weather cancellations. But on the other hand, we began work on this piece in September, when we held auditions!  In December we had two rehearsals, one to read the entire script (with the whole cast, speaking and non-speaking roles), and one to block most of the action of the play.

Tonight we will finally begin some of the most exciting parts of the process: our collaboration with Kimberly Bronson’s Kinetic Revelation Academy of Dance and the Arts. We are using dance to tell part of the story, to represent some plot elements, and to enhance the atmosphere of fairy tale.

There are lots of challenges in mounting a production of this size and scope, and we’ll be telling you about many of them here over the next few weeks, along with behind-the-scenes photos, background to the story and more! Stay tuned–better yet, subscribe by email, and get notice right away when a new post is published.

It’s not too early to reserve your tickets–this is our all-ages show for the season. It will run less than 90 minutes with no intermission and I can guarantee it will hold the interest of any child who loves story and costume. I would recommend it for ages 5 and up, but a younger child who can sit through a film in a movie theater should be able to handle this. We can promise laughter and suspense, some wild chases, a goblin battle, a mysterious Lady, a brave princess, a heroic miner boy…and more!  Call (260) 622-4610 for more information!

Theater and the Power of Make-Believe