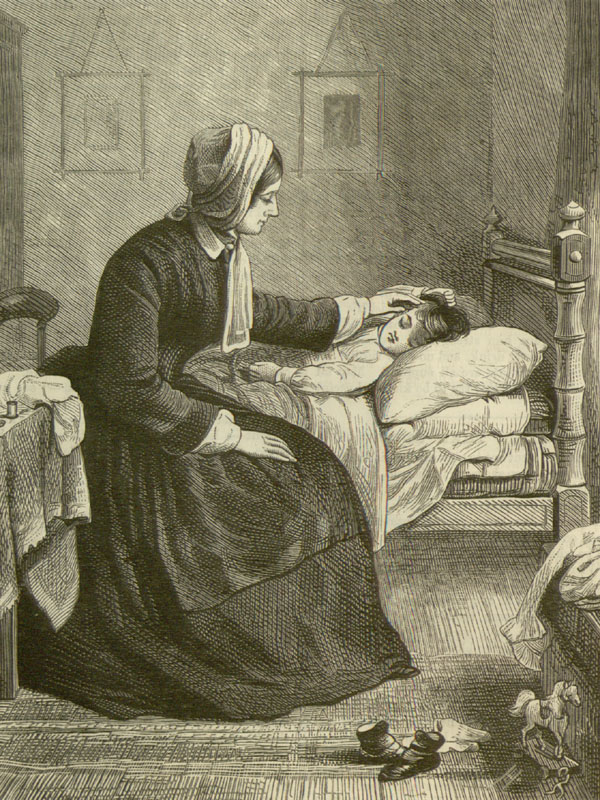 In the 19th century, contagious diseases were rampant in the United Kingdom. From 1831 to 1833, there were two influenza epidemics and the initial appearance of cholera. Then from 1836 to 1842, major epidemics of influenza, typhus, typhoid, and cholera spread across the nation. Children also suffered from diseases such as the chicken pox, scarlet fever, diphtheria, poliomyelitis, “consumption” (tuberculosis) and small pox. Small pox was a threat over a long period of  time,  but saw a especially high number of devastating epidemics in the 18th-19th centuries.  It is little wonder then that, according to Laurelyn Douglas, “nearly one infant in three in England failed to reach the age of five”, during the 1820s and ’30s.

In the 1840s vaccinations became free to all the people of the United Kingdom, but vaccination officers were only to record the births and deaths of infants, so when a child was vaccinated they had no record of it. Most people did not want to receive vaccinations because they feared they would get the full-blown disease instead–this was especially a concern during the small pox epidemic.

“Infant mortality in England and Wales peaked in the 1890s at a tremendously high rate of approximately 150 deaths per 1000 births.” The overall mortality statistics depended on various factors; rates differed by social class, and in urban areas versus the countryside. The mortality rate was very high due to disease, complete lack of sanitation, and no vaccinations, as well as vitamin-deficient diets among poor children. These conditions got worse with over-crowded living atmospheres and unhealthy working environments.

Only when persistent doctors, scientists, clergy, and other social reformers discovered the links between good nutrition, clean water and good health, did the appalling mortality statistics begin to change for the better.

“Health and Hygiene in the Nineteenth Century.”Laurelyn Douglas ’91 (English 264, 1991
http://www.victorianweb.org/science/health/health10.html

A Wrinkle in Time: Dramaturgy

Theater and the Power of Make-Believe