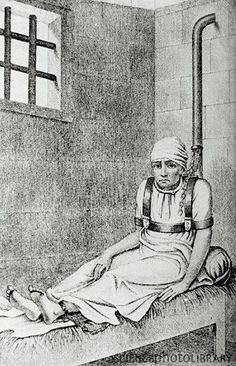 At the time of the publication of Jane Eyre in 1847, investigation into the condition of mental institutions revealed that although abuse and overcrowding were prevalent in mental asylums, there also existed a surprising level of awareness of the plight of the mentally-ill and a widespread desire to improve the conditions of asylums and the treatments they offered to those who were incapable of functioning in regular society due to mental illness.

[Ed. note:  Thus in the novel, Bertha is segregated, but not shackled. Her treatment may not strike us as humane, but for the time it was better than average. It should also be noted that divorcing a mentally- ill spouse has been legal only since the early 20th century, and even then the healthy spouse may still have some financial burden. Presumably, the husband’s financial responsibility for his mentally-ill spouse was one reason the state would not allow/encourage divorce, as the burden might then be placed on the state for her care.]

When the playwright is also a musician and sometime composer of incidental music, it should surprise…

Source Material for “A Mighty Fortress”