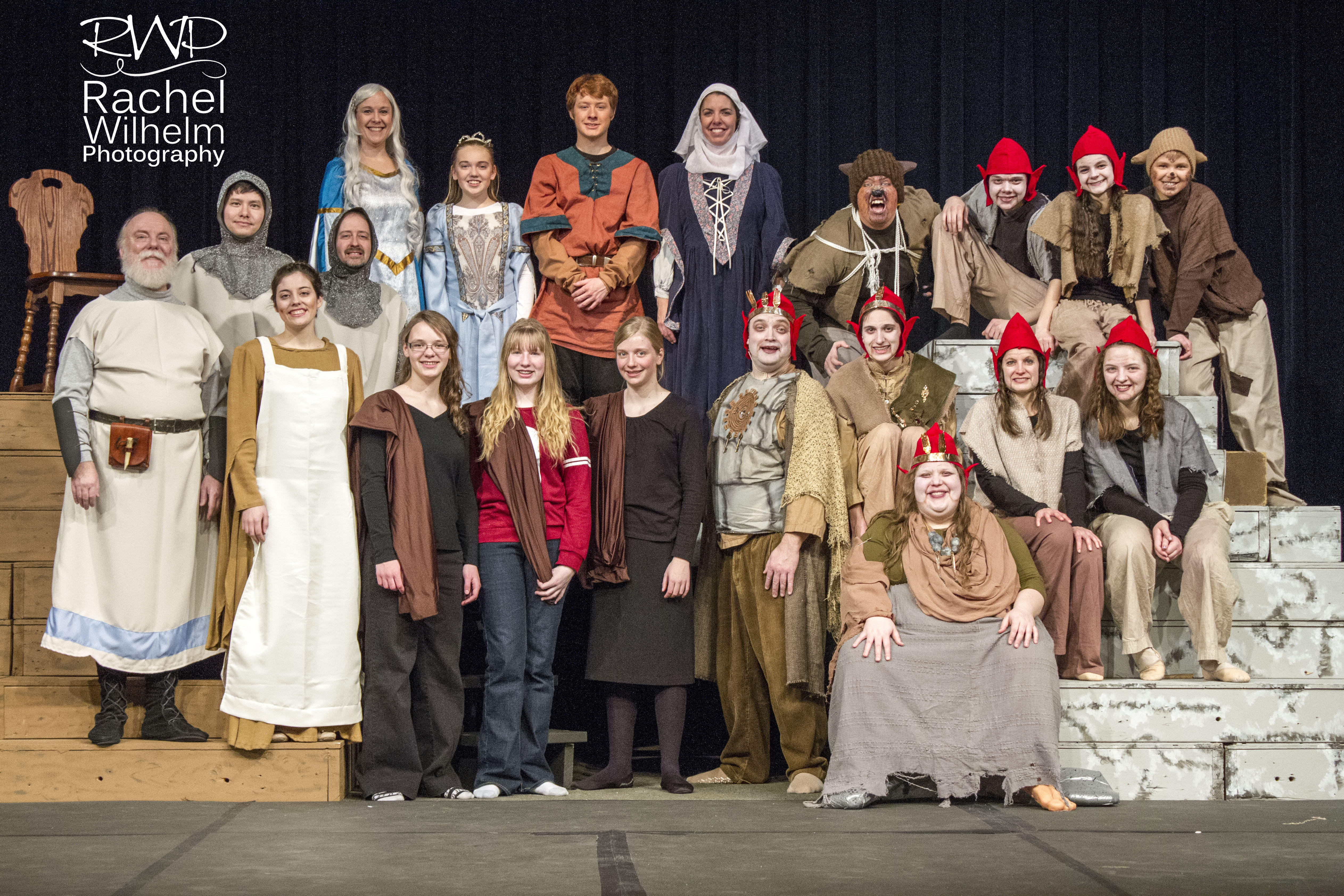 I don’t always include our reviews here, although they are generally very favorable to us. But Kathleen Christian’s “Curtain Call” reaction to The Princess and the Goblin was full of such superlatives that I could not resist reproducing it here.

OF HEROES AND VILLAINS

all for One’s spring production of The Princess and the Goblin is a classic fantasy tale full of heroics and villainy. I witnessed first-hand as this show captured the imagination of an entire audience filled with grandparents, grandchildren and all ages in-between.

It’s hard to believe the sense of childlike wonder I was struck with at every turn during this show. Whether it was the imaginative living set pieces, the mysterious and whimsical characters or the beautiful music, I felt myself riveted and awed by the stage before me.

I must make note of the pre-show entertainment provided in the director’s speech by Lauren Nichols’ co-director Jeff Salisbury. all for One always takes care to make this speech as theatrical and entertaining as possible, but Salisbury’s speech was a bit more elaborate than usual and involved recurring jokes, choreography and a few backstage crew members. It got us all laughing and ready for the entertainment to come.

Our stage opens up to two sides of a mountainous range in the kingdom where Irene is a princess. Wandering about with her perpetually-vexed nurse maid Lootie in tow, Irene stumbles onto a secret that has been kept from her young ears: she discovers that her kingdom is plagued by cave-dwelling goblins who inhabit the inside of the very mountain on which she lives.

Curdie, a young but bold miner, saves Irene and Lootie from the bothersome goblins. Shortly thereafter, Curdie is in turn saved by Irene from the very same goblins after he’s captured eavesdropping on their dastardly plans to overtake the kingdom and force Irene to wed their goblin prince. Irene, who is also bold and intelligent for her young age, is led by the counsel of her mysterious great-grandmother who lives in the attic and teaches her the meaning of faith and trust.

The cast is led by afO veteran Annika Kroeker as Irene and new-comer Jeremiah Paden as Curdie. The two deftly display a perfect air of childish innocence and curiosity while learning about the world around them and staving off savage goblins.

Kinetic Revelation Academy of Dance provides dancing goblins and set pieces. The choreography and music wow with their originality and really set the stage for this fantastical story. The dancing doors in particular are a fabulously fun part of Irene’s journey.

The goblin family played by J. Scott Kump as the goblin king, Laura Fischer as the goblin queen and Eli Ramsour as the goblin prince are riotously fun. Their characters yell and moan and screech all through the audience and on the stage, always trying to get one step ahead of the humans. Sometimes simply their wordless facial expressions were enough to cause the audience to burst out in laughter.

Directors Salisbury and Nichols, along with choreographer Kimberly Bronson, must have had their hands full with the enormous cast. But their show dances and flows smoothly from beginning to end.  While The Princess and the Goblin is a visually entertaining show, it’s also layered with allegories, some close to the surface and some a bit deeper. The underlying messages are simply one more part of what makes this show meaningful as well as captivating and a must see for all ages.

Our second article comes from Stacey Kuster, who plays Bertha. Since her character is mentally ill,…

an introduction to the short one-act “PRISONER OF JOY”