I thoroughly enjoy sound design, and relish the challenge of finding appropriate incidental music for our plays. This time, however, I knew I needed to be on the same page with our choreographer, Kimberly Bronson. Fortunately, I know Kimberly to have great instincts for the dramatic power of music to help tell the story.

Initially, I was seeking Celtic music, because of George MacDonald’s Scottish heritage.  Neither the book nor the play specify its setting as Scotland, but some of the names (Curdie, Lootie) sound vaguely Scots. Kimberly was meanwhile seeking music for the doors scenes, and the goblin dance, which she felt expressed the emotional quality we wanted to portray.

Neither of us was happy with the other’s suggestions, until I remembered a duo of Christian musicians, Jeff Johnson and Brian Dunning, whose Celtic music I had heard on a Windham Hill compilation album many years ago. I went looking for them, and was thrilled to discover that they have their own record company now, Ark Music. There Kimberly and I both listened to many song samples.

She selected a piece entitled “Her Heart Flies” (great title!) off the brand new Winterfold CD, to use for the doors sequence. She liked the “mysterious quality with a searching feel to it.” It has a pulse which suggests urgency. We used the same track for both sequences (when Irene finds her way to her great-great grandmother, and when she is later thwarted).

Meanwhile, I was looking for the music referred to in the script as the “Lady’s Theme”…the music we associate with the mysterious great-great grandmother. It would be the primary theme for the entire play, and would be used multiple times. I found what I was looking for on another instrumental album, A Thin Silence. The composition is called “Beatitude”. For the most part, this is a simple piano piece, with an electronic pad under it…we used the drone to underscore dialogue which preceded all the climbing to the tower where the great-great-grandmother was to be found. The melody is haunting and I fell in love with it at once. I’m also pleased with the sacred connotation in the title, since the Lady in the play has many characteristics of the Holy Spirit. 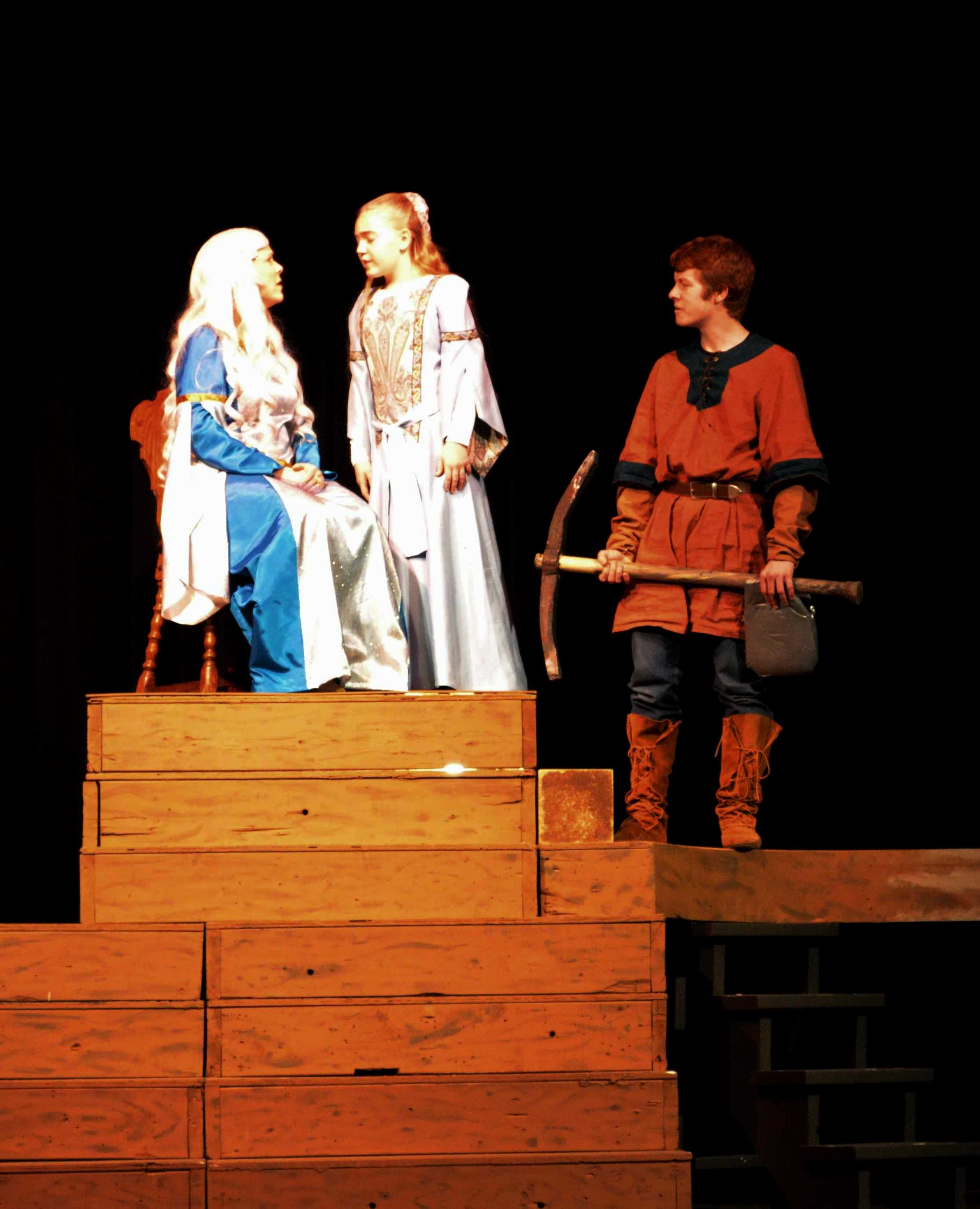 Happily, I was able to contact Jeff Johnson–I am so thankful for the internet!–and told him what we were proposing: I would purchase both these albums (and several more besides), and we would put an ad in our program for Ark Music, in return for permission to use these two pieces. Mr. Johnson responded immediately, graciously granting our request. The permission language he stipulated can be found on the inside front cover of our program. A miscommunication prevented Ark from supplying us with camera-ready ad copy, but I am hoping to rectify that somewhat by including links in this blog post to their website, and to these two albums in particular. I highly recommend them to you!

Meanwhile, Kimberly was also supposed to be choreographing a dance for the goblins, and we knew we wanted some kind of sound track under the goblin battle near the end of the show. The piece she liked best for the goblins was a percussion piece by a group of Taiko drummers. She reasoned that the goblins hated singing, so their “music” ought to be non-melodic. I agreed with her, but was skeptical that I could track down and get permission from yet another recording artist.

However, J. Scott Kump, our sound mastering engineer (aka the Genius) for the past two seasons, happens to be a percussionist. AND he plays the Goblin King in the show. I shared with Scott Kimberly’s idea for the goblins, and asked if he might possibly know how to create something similar from scratch. Scott jumped at the idea. He first created a digital track for Kimberly to use for her choreography. After he got her approval on the general sound, and length, he set to work recording a variety of acoustic percussion instruments, including some pitched instruments like cow bells and marimba. He also recorded various grunts and laughter from all the men in the cast, to layer in with the drums. The finished product for the goblin dance is fantastic and completely original.

The goblin dancers perform for the royal family 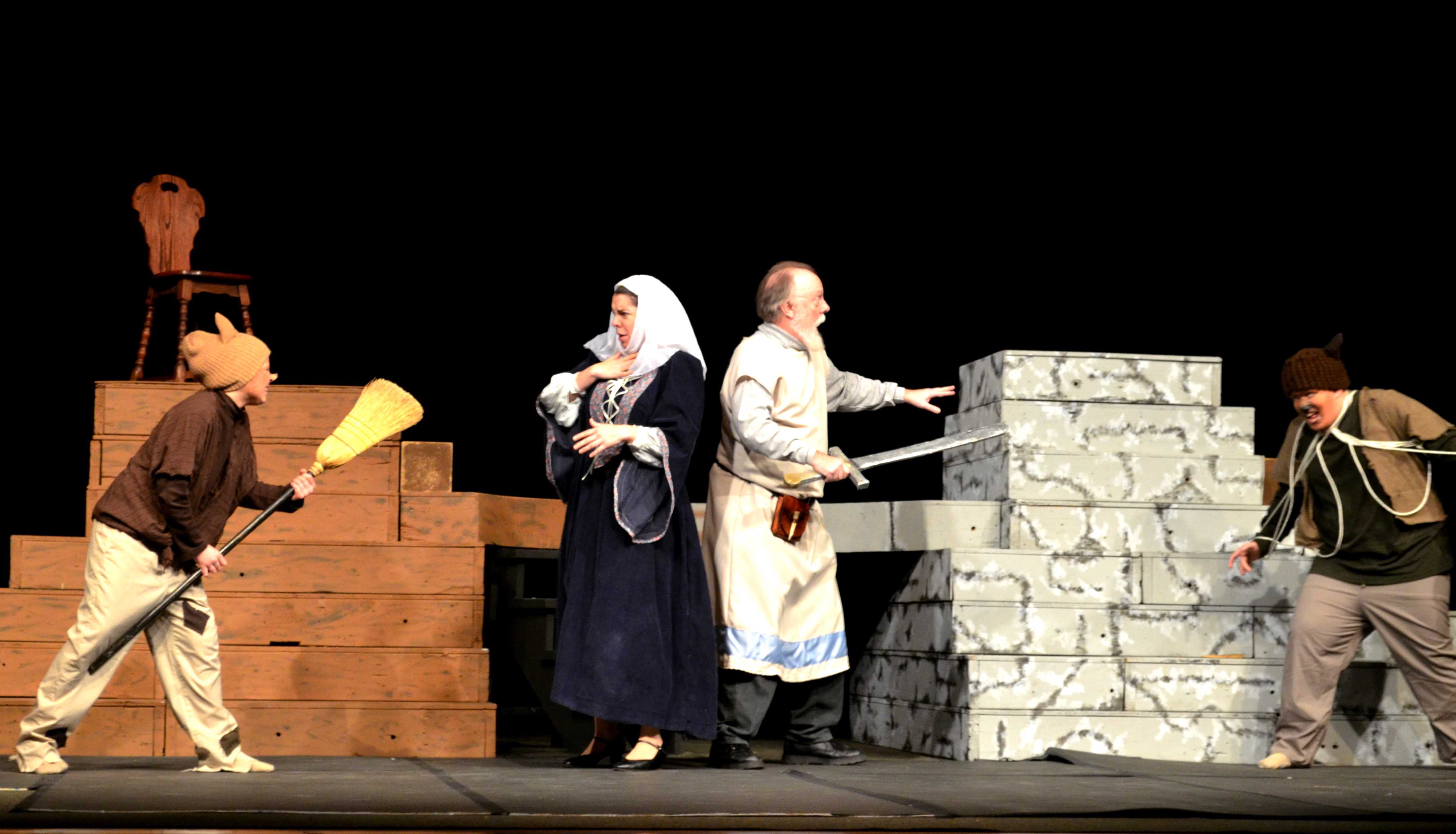 A scene from the goblin battle

Working “In the Round”

--A guest post by afO guest director for The Just So Stories,  Lorraine Knox Theatre…