As I was sitting in the studio at PBS Channel 39 last week, waiting to be part of an Arts Weekly interview (that link will take you to the whole show, of which I am the first six minutes–there will be a quicker YouTube link soon)…I looked over at John O’Connell’s list of questions for me and near the top I could see, “WHO ARE SAM AND SARA WARD?”

I didn’t let him ask it. I answered it without prompting.

Who are Sam and Sara Ward?  They are:

God-lovers,
Believer-artists,
Husband and wife,
Pastor and wife,
Parents of Eliana and Silas,
Passionate about redeeming the arts,
My friends. 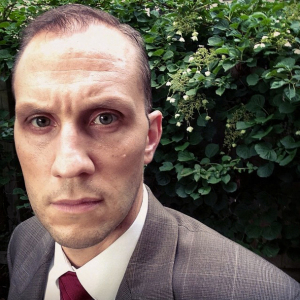 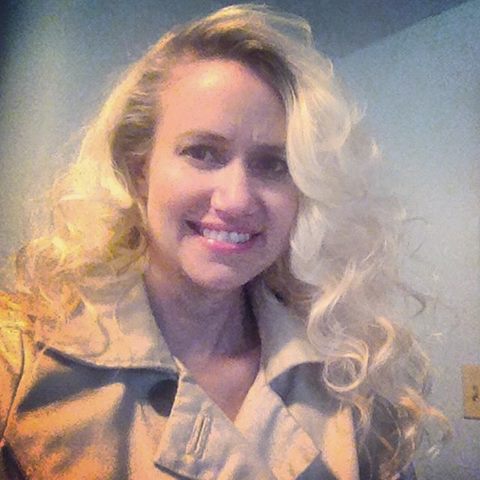 I don’t have their biographies for the program yet, but I did come up with some questions to ask them. Their answers will give you a little more insight into what is so special about this couple.

Alan sits shivering on a bench in Riverside Park. He's waiting for a ride. Lenore hurries on to use the payphone to call her roommate to pick her up. Other than their dependence on others for their daily commute, Alan…

Sound design and music selection is always an integral part of our productions, and “1984” was no exception. It did present some unique challenges. Several characters in the play only appeared as either a sound or a video cue–what should the quality of that sound be? What kind of music would exemplify this world? What other sounds would enhance it?

Scott Kump, our sound designer for the show, worked closely with videographer Brent Kuster, to achieve just the right quality for all the sounds. You’ll hear a difference between the announcer’s voice on-camera, versus his disembodied voice in the Ministry of Love. This is different again from the flatter sound in the arrest sequence (where we are presuming the equipment being used is cheaper).  Goldstein’s voice is given a deliberately vintage, distorted quality.

We have opened!  It is so satisfying to see the finished product, after weeks–or months–of planning, discussion, scrambling to find or make props and costumes, etc.  I thought it would be interesting to give you a bit of insight into choices we’ve made in a number of areas:  costuming, set design, videography and lighting design… I was going to create multiple posts, but as it turned out, all these areas were tightly interconnected. Decisions made in one area affected them all.

The script calls for identical coveralls for the Party members–they are blue in the book, though navy versus light blue is not specified.  The Inner Party are supposed to be attired in black coveralls. This all sounds simple and straight-forward, doesn’t it?

But inquiries with our area’s uniform company revealed that no black coveralls were available–navy blue and gray were my choices. And the company, while willing to loan uniforms to us, did not have the number/sizes we needed. Meanwhile, I was unsure that blue was the right choice for our production…and I did not care for the Inner Party wearing coveralls, either.

Orwell wrote his most famous book in order to illustrate what he saw as the logical conclusion to any totalitarian government. The abuses he describes fall into three basic categories:

In the world of 1984, everyone is continually watched via the two-way communication device, the telescreen. Every facial expression is scrutinized for any indication that one is not sufficiently loyal. Party members are encouraged to spy on one another for the same purpose. No dissenting opinions may be expressed anywhere–even in one’s thoughts. Ultimately, the only offense against the Party is “thoughtcrime.” Thoughtcriminals risk being “vaporized”–executed, and expunged from all history, as if they never existed. They become “unpersons.”

In creating the claustrophobic world of 1984, where no one has any privacy and wrong thinking is punishable by death, Orwell limited his own ability to tell his story in any way except as an omniscient narrator, revealing his main character’s inmost thoughts.  Winston Smith is a loyal Outer Party member who secretly hates the Party and Big Brother. But since he cannot tell or show these things in any way,  much of the book is an extended internal monologue.

Obviously, this won’t work onstage. The adaptation we are using, by Robert Owens, Wilton E Hall, Jr , and William A Miles, Jr, is referred to by Dramatic Publishing as “the authorized version” of the novel. It is certainly the earliest one, having been written in 1963. It is unclear who “authorized” this adaptation, but one presumes it was the executors of Orwell’s estate, since he had died a year after the novel’s publication.

Telling a story onstage presents challenges never faced by the author of a novel. Limited time, limited space, the need to portray visually both ideas and objects…all this may require some departures from a strictly literal approach to adaptation. In addition to truncating events for the stage, the play makes several significant changes to the characters portrayed.  The most notable is the character of Julia:

“George Orwell” was born Eric Arthur Blair on June 25, 1903 in Bengal, which was then a British colony in India. He went to Wellington for one term on scholarship, then moved to Eton, also on scholarship. After Eton, he joined the Indian Imperial Police in Burma from 1921-1928. He resigned and moved back to England.

He adopted the pen name George Orwell in 1933 while he was writing for New Adelphi. George came from St. George, the patron saint of England, and Orwell was from the River Orwell in Suffolk, a favorite English site.

He lived in poverty for some time and wrote about it in  his first novel, Down and Out in Paris and London (1933). His next novel, Burmese Days, was published in 1934 and made clear his distaste for imperialism that had developed during his time with the Indian Imperial Police. He became a teacher and an assistant in second hand bookshops to support himself, which he wrote about in Keeping the Aspidistra Flying.

He volunteered to fight for the Republicans against Franco’s Nationalist uprising in Spain’s Civil War. He fought as an infantryman in the far-left non-Stalin POUM – the Workers’ Party of Marxist Unification. He wrote about those experiences in a non-fiction piece entitled Homage to Catalonia. He was shot in the neck in 1937 and wrote an essay called “Shot by a Fascist Sniper” about the experience. He left Spain with his wife, Eileen, narrowly missing being arrested when the communists tried to suppress POUM.

Back in England, he supported himself by writing book reviews for New English Weekly until 1940. He was a member of the Home Guard during WWII and began working for the BBC on programs produced for the war effort. He knew he was producing propaganda and, despite generous pay, he resigned from the BBC in 1943 to become literary editor of the Tribune.

George Orwell’s 1984 is classified as science fiction, although–as is the case with a lot of early sci-fi–much of what he imagined is quite possible today.  However, this adaptation is limited by its age (it was written in the 1950s) as to what can be portrayed onstage. Our question from the start, therefore, was how we might incorporate contemporary technology in order to tell the story in a way which is more like what Orwell described, without contradicting anything actually in the script.

Orwell’s imagination conceived of a device he called a “telescreen” which is present in every Party member’s home, and in all public spaces in the city—inside and outside. On the screen would be broadcast news items, propaganda, and various daily events such as the Two Minutes’ Hate. The inhabitants of Orwell’s world know that the telescreen is a two-way communication device through which their own movements and words can be observed. There is truly no privacy in this world.

In our stage adaptation, the playwrights call for posters of Big Brother to stand in for the telescreens, which appear in most scenes. Actors are to pretend to adjust “knobs” on the “screen,” and voices would come from the screen at times, but there would be no image except the poster. When the screen was “on” the poster would be lit. When it was turned off, the light would go out.

This is a very simple effect to achieve, but since the technology of 2014 is rather more sophisticated, we wanted to create something more like a real telescreen. In order to project moving images on a screen so that the audience can see them easily, we need to use a large screen mounted on the rear wall of the stage. Obviously this makes it awkward for the actors to look at the screen, since it requires turning their backs to the audience. It also would seem to require that every telescreen be in the same position, since we cannot continually reposition our screen and the projector in the booth.

We solved this by

Read More→
[Based on research by Lynda Busbee, who portrays the Landlady.  For a slightly different take on this genre of literature–and a very amusing one, too–check out Nate Chen’s blog. And Nate just happens to be playing Syme in our production.]

Nineteen Eighty-Four is referred to by many people as a prime example of dystopian literature. But in order to explain what a dystopia is, we must first understand what its opposite means.

Dystopia was coined as an antonym for the previously-coined word, utopia. Sir Thomas More invented the word to use as the title of his 1516 novel about an imaginary island which contained ideal social, political and legal systems. The word utopia comes from two Greek words, ou (not) + topos (place). In other words, such an ideal place did not exist: it was nowhere…Utopia.

While ‘utopia’ has come to mean any place which is “impossibly idealistic” (Encyclopedia Britannica), dystopia connotes “an imaginary place where everything is as bad as it can be” (Collins English Dictionary). Another writer, John Stuart Mill, coined the term dystopia in 1868 to describe the British government’s policy on Irish landholding. The Mills quote below seems quite appropriate to the subject of Nineteen Eighty-Four: